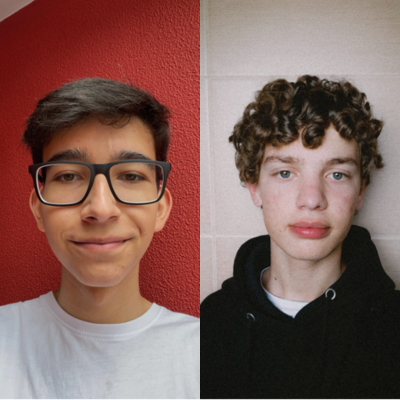 Joaquim Sousa Dória and José Tiago Fernandes Vieira were awarded the EUCYS 2022 bioeconomy prize for their research on using the banana pulp to remove microplastic pollution from water. As part of their prize, the young scientists will visit Brussels with CBE JU to introduce their project to representatives of the European institutions.

16-year-old Joaquim Sousa Dória and 18-year-old José Tiago Fernandes Vieira were announced winners of the bioeconomy prize presented by CBE JU at the EUCYS 2022 edition held in Leiden (the Netherlands) last September. Both students of Bishop DE. Manuel Ferreira Cabral School on Madeira Island (Portugal) noticed that the significant banana production in the area is leading to a large amount of waste, since each plant produces only one bunch of bananas. After harvesting, the trunk is cut and partially used as organic fertiliser for the soil, but tons of residues are wasted every year. Witnessing the untapped potential of the material, the two students launched research on the use of banana pulp to clean wastewater from microplastics.

Using the agricultural residues, the young scientists developed biofilters that showed high efficiency in removing microplastics while keeping their integrity and characteristics. In line with the 2030 Agenda for Sustainable Development Goals, the research also aims to raise awareness of water pollution and the importance of adopting sustainable living habits that minimise microplastic pollution, as well as help develop the circular economy on the island of Madeira.

An international jury chose the project from a total of 85 submissions from 33 European countries as an outstanding example of how biotechnology contributes to fighting climate change by converting biomass into viable eco-technology.

Following the ceremony, CBE JU’s Executive Director ad interim Nicoló Giacomuzzi-Moore congratulated the winners: ‘I strongly believe your ground-breaking research project will help the European bio-based industries community tackle the great challenges we face toward a truly circular society. Thank you for building a better and more sustainable future with us.’

Every year the European Commission organises a contest for young scientists, which was set up to promote the ideals of cooperation and interchange between young scientists. The European Union Competition for Young Scientists (EUCYS) serves as an annual showcase of the best of European student scientific achievement, giving students the opportunity to compete with the best of their contemporaries at European level. The EU Contest for Young Scientists is part of the Science and Society activities managed by the Directorate-General for Research & Innovation of the European Commission. Since 2016, CBE JU has supported the contest by sponsoring the bioeconomy prize. The awarded project shall use raw materials of biological origin in a sustainable, renewable, and innovative way whilst promoting scientific research and raising environmental awareness. The winners will visit the CBE JU Programme Office and EU institutions in Brussels, as well as some of the CBE JU-funded projects.